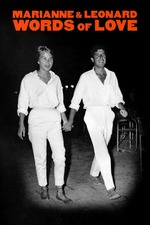 In the great Bob Dylan vs. Leonard Cohen debate, I am team Dylan all the way. I basically viewed the documentary in the best way possible, knowing practically NOTHING about Leonard Cohen (except some basics, like he's the guy who did "Hallelujah" and being a super Suzanne Vega fan, I was familiar with "So Long, Marianne" because of her duet of it with John Cale).

I have great admiration for Nick Broomfield, the director. Really, he's a great documentary filmmaker. That being said, the timeline was out of control and not in a good way. It's really the main thing that brought it down. It was completely messy. The story was good. The interviews were good. The filmmaker knew Marianne, Leonard's muse. This is a blessing and a curse. Some people were upset that Broomfield put himself in the film. That didn't bother me, because it was interesting. However, it's true that the story was not about him.

It was a solid film that held my interest, despite knowing practically nothing about Cohen. The amount of drugs he took was MINDBLOWING. Still, it left some things out, including Leonard's 2 children. I knew about Adam Cohen, because he did a duet with Virginie Ledoyen (the more you know, eh?) and I did not know about his daughter, who had a child fathered by Rufus Wainwright (thank you, Wikipedia).

Take it or leave it. There will be people who criticize it - and rightly so. Then again, if you want to see a mish mash of Leonard Cohen's life and are open to the zig-zagging story of him and his muse, Marianne, then come along for the ride.

Vegan alert:
-Reference to donkeys tripping on acid
-Salami and other meats are shown