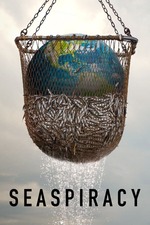 As we plunder our way toward extinction, there are a slew of documentaries that will shine the light, make us fear for our long-term survival, and turn us all into temporary Greta Thunbergs. Produced by Kip Anderson (director of What the Health and co-director of Cowspiracy), first time feature director Ali Tabrizi investigates the problems in our oceans today.

When the documentary starts, it's clear that plastic should be outlawed. However, deeper and more sinister issues arise when Tabrizi completely exposes the industrialized fishing industry. Fishermen kill dolphins for "pest control" so they won't deplete the fish supply in the area; the institutions who guarantee "dolphin-safe" tuna hardly monitor what is going on and are there for the licensing fees only. Even the Sierra Club wouldn't come out against eating meat in order to not lose members. It's clear that with the depletion of fish in the oceans, it's hugely responsible for the destruction of the coral reefs and may ultimately impact our chances at survival. Chasing Coral is an important documentary that focuses on global warming as the main cause for coral destruction; however, this documentary goes into depth about trawling: a method of fishing that completely destroys ocean floors.

It's also explained that hunting wild animals leads to Ebola outbreaks. The documentary makes a case for not eating meat or fish. However, our taxes subsidize the fishing industry; the same amount would solve world hunger, clearly proving that fishing is neither sustainable nor practical.

Marine biologists Sylvia Earle and Jonathan Balcombe explain that fish feel pain. The whole film contains disturbing imagery which might disturb people who are already against animal abuse. However, for those on the fence who feel even a little bit of empathy, it is clear that eating habits need to be re-evaluated. And if Omega-3s are a concern, we can get it the same way fish get it: through algae.

Vegan points:
-Whaler Jens Mortan Rasmussen explains that each animal has the same exact value and understands if someone wants to eat only fruits and vegetables and not kill animals
-Sylvia Earle doesn't eat fish or any other animal