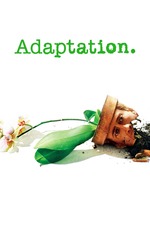 Why: Finally watched Eternal Sunshine of the Spotless Mind (2015 #64) and realizing Charlie Kaufman also wrote one of my favorite movies this year Synecdoche, New York, I wanted to see what other greatness he wrote.

Nic Cage starring in a movie playing Charlie Kaufman writing an adaption of a book about an orchid hunter. Very quickly you realize the movie itself becomes the adaptation Charlie has written.

Unfortunately it does not end as well as Kaufman's other scripts. Part of me wants to believe that ending is a play on Donald becoming involved in the adaptation and the movie continuing to play on the story becoming the movie. However, I think Kaufman just lost steam.