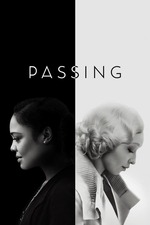 "I'm beginning to believe that no one is ever completely happy, free, or safe."

The precision that Rebecca Hall employs in her directorial (and screenwriting) debut is evidence of a decade of passion and delicate study of the Stella Larsen 1929 novella of the same name, as well as a personal and creative reckoning of her own family history all wrapped up inside of it.

With any other debut director, I would have said that using black and white here was no more than a stunt based on the story and its racial themes, but the way Hall crafts this, she uses her photography to bring out the internal aspects of her characters instead of merely reflecting the outward themes of race; it actually becomes more of a creative force that drives the film, instilling and opening up its purposely crowded 4:3 ratio.

The performances from Tessa Thompson and Ruth Negga are stunning: Thompson so fully formed in mannerisms and expressions, while Negga remains an enigma wrapped up in a curt smile for us to continually try to figure out as the film moves along. Hall provides us with moments, glimpses into their characters to understand their perspectives and why they do the things they do, feel the way they feel, and not just as people of color, but as women, mothers and wives and the emotions that come along with each of these roles during this time period. It's as much a fascinating character study as it is an examination of race that is not simply an answer to what it meant to be black in the late 1920's, but shows the trajectories their lives would take based on the choices they made and what their genetic make-up would allow for them at a time when black men and women were still beaten and even killed for the smallest offenses.

In the almost week it has been since I watched this, I have not been able to get this film out of my mind. When the film fades to white, the wintry snow encapsulating the screen, it's as though the film is telling us there has to be something better than this waiting for the future generations of black women (and men) on the other side of this story. Though Passing at times almost seems more like a thesis statement than a film per se as the black and white photography is obviously there to point out that nothing is indeed just black or white, Rebecca Hall is working with such an exacting sense of purpose that her passion pours out the sides of the frame and we're left probing its mercurial characters long after the closing credits.

While I'm grateful for Netflix and it's support of filmmakers as they are able to support the vision for their films and to get them out to the largest audience possible, yet I can't help but wonder what a theatrical experience for this film would've been like for me; being enveloped in that dark theatre by these women and their story would've possibly added even more to what has already been of the most unique film experiences from the 2021 film year.