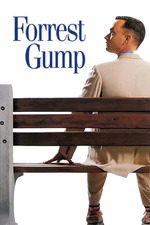 Thanks to the Unspooled community, I am learning that I am not the only person who dislikes this movie. I had no idea! I thought it was just me. I could not stand Forrest Gump when I saw it in the theater and to this day, I think it is complete trash.

Rewatching it now closely, and not much has changed.

First, there's no plot. It is just a guy's life, and stuff happens. That's not a story or journey. It's a cheap form of narrative, which I think evades making creative choices, providing compelling drama, or connecting to any of the characters. And that the whole thing is framed via some guy telling his whole life to strangers on a bench? That's just inane.

Every scene makes me cringe - both for the eye-rolling situations, and the people who wrote and created it. Forrest sprinting through a football practice? Constantly "protecting" Jenny from being a woman and expressing herself? The portrayal of war, Black Panthers, hippies... even just history itself? None of it feels real. None of it feels right. It's all there to make you go "oh I get it." It is utterly artless. There's more subtlety in fast food commercials.

What it breaks down to though is that I don't think cluelessly going through history is any sort of worthwhile path. He talks to three Presidents, Elvis, Lennon, etc. and basically has no idea? UGH. I feel nothing but confusion, bafflement, and annoyance at everything in this film.

I gather that perhaps there's some intended irony, and maybe the film is mocking some of the presented ideals: patriotism, war heroes, romance, etc. If that's the case, I think it's biting off way more than it can chew, and doesn't succeed either. Detachment does not equal ironic, and it is just too hard to read cynicism into the story of this man.

To end on something positive, I do think the acting is quite good. But that's all I can give it.