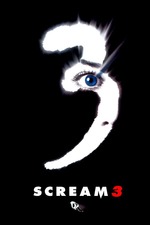 Scream 3 is the perfect end to a brilliant series. Set a couple of years after the events of Windsor college Sidney Prescott, who has been in isolation, is lured out when another masked killer begins a murderous spree that brings back the core characters from the original film.

Scream 3 is regarded as the weakest in the series, and I can understand why, yet the insatiable criticism is both unjust and ridiculous.

Scream 3 manages to tie up loose ends, give Sidney her best arc and brings the Maureen Prescott saga to a nice close. The script is somewhat disjointed at times, which, with the secrecy and rewrites is understandable, yet it manages to provide possibly the series best and meaningful dialogues and heartfelt moments.

The core characters are in their element but except for Parker Posey's hilariously chaotic Jennifer I really didn't connect with the new bunch, except perhaps detective Kincaid. On top of that the comedic tone (apart from Gale and Jennifer's double act) is a little forced and these turn out to be my major gripes with this film.

What works for this film is Sidney's story. We get to see the toll the events of the previous films have had on her and her mental state. The nightmare sequence is hands down the scariest moment in any of the films. Neve Campbell gives possibly her career's best performance.

The opening and subsequent death scenes are not as good as it's predecessors in my opinion but that is all made up for by a particularly intense, relentless finale. The killer reveal and motive is rather delicious even if the killers whining nature is a little annoying, my sentiments here are reciprocated by Sidney's own speech with him. "Get on with it, I've heard this shit before!" she yells.

The voice changing device used to fool a lot of the characters is a great way to move the narrative forward though it does at times seem a little cheeky to have introduced this. On top of this there are some sublime sequences, such as Sidney on the sets of Woodsboro and Gale, Dewey and Jennifer confronting Milton, which makes the #Metoo movement all the more potent.