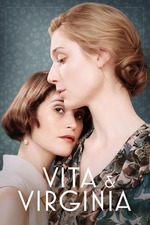 “Do you ever feel that you record things rather than feel them?”

A mishandled assembly of what could’ve been a fantastic film, but it’s still full of great pieces. It just doesn’t feel fully realized. Part of this is due to the strange passage of time, as well as the incorporations of subplots that feel like details that needed to be included from a biography, rather than moments organic to this story. What it lacks it structure, through, I found to be compensated for in the dialogue. These are two wildly intelligent, insightful women, and their words here felt true to that. Observations made in passing by one character hit another straight to the heart, and it’s the moments like those that made this quite lovely.

I feared this would be a dry period piece with nothing but its performances to brag about — it’s more than that, but the work done by the two leads remains the most impressive. The vulnerability of their final scene together will stay with me for a while.