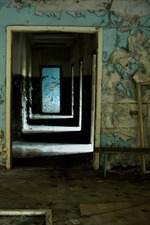 Kirkegaard has been one of my favorite artistic discoveries of the past few years ever since I first listened to 4 Rooms, and when I found out about this film soon after, I immediately thought that it would be one I'd absolutely never be able to see. The DVDs were (are) out of print, and it didn't exactly seem like the sort of film people would be rushing to revive. But here I am, now having finally seen my first new ten for the year, and boy was it worth the wait. This would probably still be incredible even if the visual component was entirely unchanging, but Kirkegaard manages to match his complex, beautifully deafening drones with subtly layered digital & video manipulation, establishing parallels between the two that reach a plane of sublime harmony. This is the definitive work with regard to exploration of space through sound and light. The context behind these sounds and images narrativizes them into a documentation of tragedy and loss, phantoms trapped within a hall of mirrors, echoing upon itself ad infinitum until the source material has vanished entirely. Rooms of desolation transform into non-places, outside of history, outside of materiality. The image fades to white and the room disappears, succeeded by specters of reverberatation.