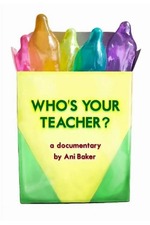 Who's Your Teacher opened with questions posed by children, highlighting their curious minds' inability to access pertinent information. I thought this short documentary would then dive into the modern educational system and explain what is being taught and to which age groups. This did get glossed over at times, but more focus appeared to be anecdotal and lingered on past education from the eighties and nineties. What gets discussed comes mostly from people in the adult industry recollecting the times their audience approached them online with probing questions. Clearly this is an issue as aside from their content not being aimed at malleable minded audiences, the industry as a whole deals with unrealistic fantasies.

A point touched upon multiple times circled around the concept of teaching lifelong people skills such as interaction, content, alternative sexualities and genders - all before before sex even enters the equation. Children educating themselves as informationally void classrooms give no answers has been a staple of magazine advice columns long before turning to online personalities. Not touched upon here, but I am more aware of the early YouTube trend of advice videos; I gather the current youth delve elsewhere for responses.

So teachers cannot give the answers due to curriculum confines and the lacklustre information gets presented clinically. Alternative sexualities and genders never get mentioned in the binary education and the few times the whole topic gets addressed comes in a class warning of STDs and drugs. The information discussed needed clearer examples of what actually gets taught today, rather than just the desire of promoting social intercourse and awareness. As an adult two decades outside schooling, I know nothing of what currently gets taught - and after this I agree that diversity and social interactivity is important; yet I do not know what specifically manifests within the curriculum. I gather nothing specific gets taught on a national scale - the breakdown received a brief mention, but it needed a more focus with statistics, rather than talking heads.

Ian A. is using Letterboxd to share film reviews and lists with friends. Join here.