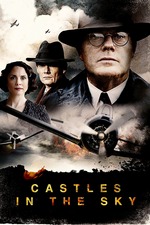 Castles in the Sky

Castles in the Sky is one of the few films I've actively anticipated watching.

In short, I really enjoyed it. Castles in the Sky manages to mix the historical narrative of the invention of radar with the personal dramas of all those involved in its development. Eddie Izzard plays a sincere and thoughtful Robert Watson-Watt who against all the odds manages to get his invention on the radar (pun intended) of the Air Ministry. The way it tells not only Watson-Watt's story but also the story of the rise of Hitler through archive footage shown 'in parallel' to the film's events is definitely interesting. While the film felt at some points a little slow, the drama of the struggle of this small band of men to protect Britain as Nazi Germany struck certainly made up for it.

The very poignant ending of the film, showing Watson-Watt being turned away and sent home once the Air Ministry had used all his skills to develop the Chain Home system made a tear roll down my cheek as we saw him begin to fade away into the background, his marriage ruined by his commitment to his work and country.

This film, coupled with the recent erection of a statue of Watson-Watt in Brechin certainly makes a fitting tribute to this otherwise undercelebrated man.