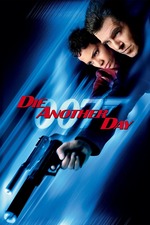 I used to think Goldfinger was one of the most preposterous films I had ever seen. I was wrong.

Die Another Day must have one of the most far-fetched and improbable storylines of any film. In fact, so crazy is the storyline that the only response I was capable of was laughter. While this may not have been the intention of the director, it was certainly an amusing film. In credit to those who wrote the script there were numerous plot twists throughout the film, some better disguised than others, which added some excitement to an otherwise 2-hour pantomime of explosions. Interesting to note was the absolutely awful title sequence track. Overall though, I was disappointed by Die Another Day.