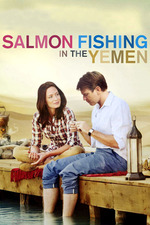 After watching Salmon Fishing in the Yemen, I found myself with mixed feelings about the film. In fact, as the relationship between Dr Jones and Harriet blossoms, I felt increasingly unsettled by the way first Dr Jones and then Harriet dispose of their previous partners in such a nonchalant manner. Whilst it seems that Mary Jones may be partly responsible for her husband's 'defection' though her acceptance of a six-week assignment in Geneva from her employers, which leaves her husband behind in London to work alongside a beautiful investment adviser on the seemingly impossible task of bringing salmon fishing to the Yemen, it felt very awkward to watch what Mary herself described as a "textbook mid-life crisis" unfold before my eyes. The Jones' confrontation about the matter by the side of the garden pond left me wincing as I internally urged him to return to his wife, who it is made clear does love him. Her desperate text to him when he is in the Yemen "Please come back" and his apathetic reply "I'm sorry. It's for the best" felt truly saddening to watch, and Harriet's perfunctory disposal of her soldier boyfriend, who survives a deadly attack in Afghanistan only through his undying faith in her, felt wrong as we witness him mutely observing her return to Dr Jones 'to say goodbye.'

Although the film is delightfully produced, from the cinematography to the soundtrack to the locations, I really didn't like the wrenchingly painful love story that accompanies it.