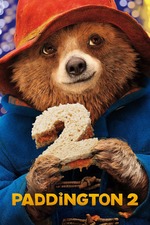 there is a lot that i have to say about paddington 1 & 2. i wanted to talk about them both here.

i want to start by saying that paddington absolutely blew my expectations away. i had constantly heard how good both paddington movies were, and i couldn't even imagine what they would be like. i thought that surely they would be overhyped. but boy was i wrong.

paddington starts out incredibly. it immediately sets the tone of the whole movie. the jokes are rapid fire and consistently land. it's quirky and doesn't take itself too seriously. but at the same time, there is a great amount of thought put into the origin story that it's telling. it's well thoughtout, it's clever, it's funny, and more importantly it perfectly sets up the events of both films. as we get further into the backstory, we learn that the movie is also gonna be tragic.

to me it also carries some pretty fantastically handled social commentary about the way more fortunate people view the homeless and immigrants, and more accurately homeless immigrants. paddington is a talking bear. an actual talking bear. not to mention he is one of the most kind beings to ever walk this earth. and yet in public, no one seems to care. he is ignored repeatedly, people physically push past him, and some people even seem repulsed by him. even when he is eventually taken in by the browns, not everyone in the family fully trusts him. he tells nothing but the truth, or at least what he knows as the truth, but yet he's often the subject of suspicion. sometimes it's an unfortunate misunderstanding, but most of the time it's simply because he's different and being judged for things that he can't even control. all the while he has has a beautiful soul.

paddington's not perfect though. he gets himself into a lot of tricky situations because he's clumsy, young, and...well he's a bear so he doesn't have full knowledge of every human thing. to me, this makes him a much more interesting and believable character instead of being a one-note can do no wrong angel.

the villain in the first paddington is genuinely kinda scary. she's clearly a fucking psychopath, and she creates a lot of really intense moments. a lot of times in these movies i was sure paddington would get out of his predicaments okay, but in the moments i couldn't help but be so scared for him.

i mentioned how thought out this movie is but let me reiterate that. everything is important. there are satisfying character arcs (not to mention just great characters who aren't paddington), callbacks, and plenty of details to keep your eyes out for.

my one complaint about the first movie is a tiny one that the cinematography and style doesn't fully shine until a little bit further into the movie, but this is so so minor. this movie is fantastic and by the end of it i loved this fucking bear so much.

paddington 2 is somehow even better. i'm not gonna go too in depth because a lot of what i said for paddington 1 just applies to both movies, but what this movie really improves on is style. there are so many unique, beautiful, colorful, and quirky shots that i can only compare to a wes anderson movie, but paul king manages to make it his own.

the story of paddington 2 is way more interesting, and way more complex, and even dives into commentary about our policing, our social justice system, and prison reform, but i won't get too much into that. i think it's really a movie that needs to be experienced.

paddington 1 and 2 are rollercoaster rides of joy, fear, hilarity, and heartbreak. i have genuinely never cried at any movie as much as i did during these two. in the movies, paddington seems to have some kind of magical ability of eventually making everyone around him love him, and that magic extends into the real world. if you don't love this damn bear by the end of these idk what to tell you. you're probably a psychopath with no redeeming qualities and i hate you