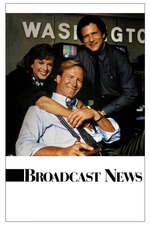 How did I miss this one for so long?

For a Twitter-type capsule review, I'd describe BROADCAST NEWS as "You know that serial killer NETWORK from down the street? Well, he had a nice kid brother. Nice kid. A bit of an edge." Which, given that I consider NETWORK to be one of the 20 or so best movies I've ever seen, should give you some indication of the quality with which we are dealing. And it's hard to separate the two, since they act as premonitory bookends; the one a sort of dark prophet predicting a dark future of "entertainment-ized" news and cult of personality demagoguery, the other standing on the cusp of that vision come true, peering into it—less sweaty-toothed madman (at least until Glenn Beck came knocking) and more a well-coiffed, likeable, eager-to-please vacuous abyss (William Hurt) and a system that has designed itself—to that system's own consternation and bemusement—to be abyss-accommodating.

I think it's all the more impressive, not less, that all this commentary is the filigree to what is, in the end, a top-notch workplace romantic comedy, which is simultaneously deeply affecting and hilariously funny. (I've already written longer than I wanted, so I'll just have to leave it at this: I'm giving short shrift to the funny. It's a VERY funny movie. I'd pair it with the following year's BULL DURHAM as the apotheosis of the form, at least for the 1980s.) The love/respect triangle which develops—between Holly Hunter's driven producer, Albert Brooks's principled and prickly field reporter who is smitten with her, and the smooth labradoodle in a suit to whom she finds herself drawn against her will—works both as text and subtext, as narrative and allegory. I keep revisiting the various actors, trying to decide which of the three is greatest in this, but it's impossible. I think all three would have been worthy of Oscars; all three are in the pantheon of great performance. Is it possible that all three legends give their career-best performances in a single movie? I won't say that's what it is, but it's how it seems. I suppose in the end I'm with Brooks, who is just utterly heartbreaking. He loves the news, and the news...well, the news likes him. He just can't get the news to love him back. It's not her fault. There *is* no fault. It's just how it is.