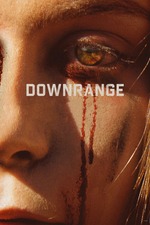 A step-up (but just barely) from Ryohei Kitamura's execrable The Midnight Meat Train (2008), this movie is probably decent with crowds but mostly a total failure as an actual horror film otherwise. This is classed as "action-horror" but there's no horror, and no real action either? So I don't really get it. The tension evaporates like a fart in the wind after a decent intro, and it's all downhill from there. The movie veers towards "so bad it's good" with some truly awful performances and dialog, but never quite commits to any specific tone -- a pet peeve of mine, and something I'm finding I don't like about Kitamura's directing in general.

I'm also not really one to complain about a lack of explanations, but there also really should have been *something* given on the sniper. Like, even give him some kind of quirk. Maybe he chews gum! Something. Anything!