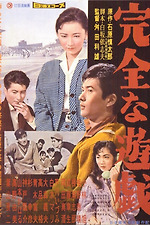 A group of Sun Tribe college kids are looking for a get-rich-quick scheme to pay off some debts and one of them suggests that they rip off a local bookie. He has an inside scoop that that there’s a five-minute delay between the end of a race and the bookie getting that information across town. During those five minutes, the bookie still accepts bets, so the boys figure if they can transmit the information quicker than five minutes, one of them could place a bet on a known winner. They set their plan in motion with a relay of semaphore signals and phone calls … and they’re successful! The problem is, the bookie doesn’t have the money to pay them...

The Perfect Game is another Toshio Masuda film from 1958. He made about six films that year and the three I’ve seen are all excellent. As in Red Pier and Rusty Knife, there’s a sprawling quality to the film, with lots of different characters to follow. There's a bit more emotional focus in this one, however, especially in the way that the bookie and his sister emerge as vulnerable characters and in Sôji’s moral awakening in the second half of the film. Like Masuda’s other films, it also has some incredible cinematography and tight editing. It never becomes as formally fragmented as A bout de souffle, but many of the shots had a similar kind of breathlessness — especially a few dynamic tracking shots following in front of characters. The suspense is nicely managed throughout as well.

I wonder with these Sun Tribe films how deliberate the filmmakers were in their moral ambiguity about the delinquents. In this film, for example, we’re initially along for the ride with the guys and it’s only when they take it too far that the condemnation of them sets in. But then we have Sôji as a moral conscience to follow during the second half of the film. So, how much does Sôji’s moral turn let the Sun Tribe kids off the hook, revealing the possibility of a moral center? And is that always the case in juvenile delinquent movies — our desire to empathize with characters and see them change for the good often resulting in redemptive stories that soften the overall condemnation of the youths?

It’s interesting to compare with Crazed Fruit in this regard. Both were written by Shintaro Ishihara after all. In Crazed Fruit, the point of empathy throughout the film is the younger brother, Haruji (Masahiko Tsugawa). Yet, he ends up being the most psychotic character in the film. This is, in many ways, the opposite arc of Sôji, who starts amoral and ends redeemed. But is one more critical of the Sun Tribe movement than the other? It’s hard to say ... which makes me think that the filmmakers were quite happy to have it both ways: exploit the cultural interest in the Sun Tribe, insert enough bad behavior for a surface reading of condemnation, but really be more interested in a whole bunch of other dramatic and aesthetic concerns.