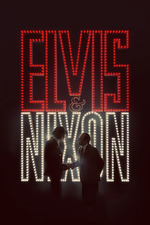 This was a lot of fun. A perfect film to end the night on, and a treat to catch with a huge crowd completely getting into it.

In the year 1970 Elvis (Michael Shannon), determined to play his part in protecting America, turns up at the White House with an unusual proposition – insisting on being made a Federal Agent at Large so he can work undercover and do his part for the country he loves. While Nixon’s aides see the PR value in picturing the curmudgeonly Nixon (Kevin Spacey) next to the King, he shows no interest in the meeting.

Circumstances bring them together, with Elvis and his comrades holed up in a hotel room waiting for the call. We know that they two met – there is photographic evidence – but what really happened in the Oval Office that day? Elvis and Nixon is an imaging of this bizarre situation – truth be damned – completely embracing it to frequently hilarious results.

Any trepidation about Spacey playing Nixon is quickly dismissed; he absolutely nails the interpretation. But, the great thing about this unusual biopic is that neither performer is completely committed to total ‘authenticity’, and nor is the film. Michael Shannon’s natural charisma, and physical presence, means that he effortlessly carries Elvis’ swagger without overdoing the ‘impression’.

The film’s final act is a riot; Shannon is a pinball; breaking down the stuffiness of Nixon’s office and turning it into a playground for political discussion, cultural appreciation and even some karate. This film has no other agenda but to please, and definitely worth the goofy journey to the meeting.