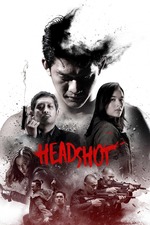 While it is certainly not the true "second coming" of silat star Iko Uwais, Indonesian actioner Headshot is intriguing and hyper-violent in its own right.

Following The Raid and The Raid 2, a few of us got carried away and imagined that Indonesia might quickly transform into a reliable source of quality martial arts mayhem. This has proven unrealistic, in part because Indonesian cinema is only recently recovering from a very long slump and most films made there are locally-focused, low-budget horror.

With that being said, Headshot is in some ways the nearest thing to a successor to Gareth Evans' Raid films made in the country, having some of the same companies and actors involved. Oddly, an even closer comparison can be made with Universal Soldier: Day of Reckoning. Peter Hyams' 2012 film is the source for much of Headshot's plot, with the sci-fi elements removed and the action transplanted to a provincial Indonesian island.

The film has a lot going for it, including its unsettling atmosphere balanced with small moments of tender drama. Iko Uwais and Chelsea Islan are very good as our amnesiac hero and his saviour, respectively, and the action choreography from Uwais Team is as accomplished as you'd expect. Where the film struggles is with the Mo Brothers' direction.

Their background is in horror, and in Headshot they don't quite transition successfully to the action genre. Their approach is more concerned with the bloody destruction of bodies over the thrill of flowing choreography, which will disappoint some action fans. Their sense of pacing in fight scenes is also somewhat off, and energy is sapped by a lot of strange pauses which don't accomplish anything.

Headshot is a brutal and often satsifying chapter in the developing story of Indonesian action cinema which further shows how much raw talent there is for the genre in the country - it will just take a more genre-aware approach to fully unlock that potential.