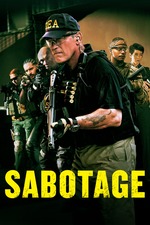 A frequently gripping surprise, Sabotage seems to me to be seriously undervalued. While it's not a star vehicle per se, this is easily one of the best of Schwarzenegger's recent films.

The big man and his co-stars are all radically transformed to become an initially tight-knit team of reprehensible cops who gradually disintegrate under the weight of mutual suspicion. The camaraderie and gung-ho police savagery are very convincing, and there's a real sting to the nastiness and brutality of the tale without losing sight of the human dimension. In an odd way, this is almost a trashier proto-Sicario and that's high praise.

On the Blu-Ray there are two wildly different endings and a raft of cut footage, including the bulk of a dumped subplot.