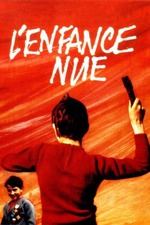 At age 44, Maurice Pialat made his film debut 'L'Enfance nue,' a film that observes the erratic and rebellious behavior of François, a 10 year old who is in the foster care system after being abandoned by his parents. We find ourselves in a journey where we are constantly disappointed by the decisions François makes, showing the rough reality of growing up without his parents and how having a lack of direction in his life affects him in every possible way. The way Pialat shows childhood strays from the very common nostalgic or romantic lens that usually comes with films that deal with the exploration of childhood, this choice makes the film feel very urgent and relevant even to this day. All of Pialat's work I've watched so far deal with social issues and matters related to the lives of the French working class and of course this film is no exception to that. He's made films that have touched me in a personal level, again and again, but they have also inspired me to want to make films that feel relevant to the social issues of today. I cannot thank you enough Pialat, for your honesty and dedication to Cinema.