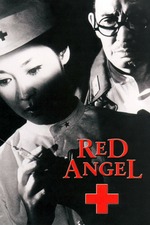 Post world war II Japan has, in my opinion one of the most fascinating film cultures that exist. Often their films took on a wild, unrestricted tone, both morally and aesthetically. Many directors seemed to have different ideas how to rebuild Japanese society or thought there was no chance Japanese society could be rebuilt (Cruel Story of Our Youth).

Red Angel sadly seems to be of the opinion that the solution is for women to be more amenable to the men around them, being servile will help restore their confidence and then Japan's honor. One of the major storylines involves resolving someone's impotence. You can likely guess how I feel about that.

This was the most recent Yasuzô Masumura film I saw, and it will likely be the last. He was someone who I kept seeing his films because friends loved him even though I felt blandly indifferent toward his style. Never have I felt as dually bored and angry as I did during Red Angel.

Entirely flat characters that serve as nothing but metaphorical props for a morality play that I can't get behind even a one hundredth of a percent.