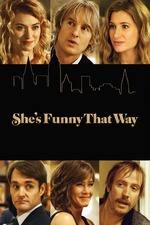 Here it is! Part 2 of my video countdown of the top 100 films of the 2010's. There is an easter egg of sorts in the montage that precedes the countdown. If you can guess what it is by the time I release part 3, I'll give you a special thanks in part 4!

She's Funny That Way review: Shocking that in a post-Weinstein world, a movie about a director who sleeps with sex workers and then gives them $30,000 to encourage them to live "better" lives could be as incisive and funny as this, but if anything, the knowledge of the world of art production makes everything in She's Funny That Way even more darkly, sweetly humorous, especially its final gag.

For instance, I doubt I laughed at Owen Wilson's sadly earnest delivery of the line, "I'm a feminist" on first viewing but now being slightly more aware of his patriarchal bullshit, I guffawed. And what's even more surprising is that even with how patronizing every man is towards every woman in this film, it doesn't make me sad. Going into the film, I'm like Illeana Douglas' reporter character, looking to drain every story of its potential magic with cynicism. But by the time the movie ends, I'm like Imogen Poots' Izzy in her embtace of magic and optimism. I don't even totally know why. There's nothing romantic about it or life affirming. But I find it to be both of those things almost in spite of itself. Absolutely the closest that a modern film has come to capturing the "magic" of Old Hollywood without having to ignore the intervening decades since.