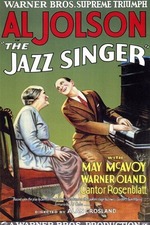 I actually started watching this film with my film lit class on Wednesday, but we didn't have time to finish it. We finally finished it today, so I am now at liberty to talk about it. This is actually another strange movie for me to grade. It's another instance of a 3.5-star-objective-but-4-star-subjective enjoyment for me, and I think most of the reason that the 3.5 is even here is just because of film making techniques that don't hold up quite as well. I think it's important to take both the perspectives of the audience at the time a certain movie came out and modern audiences into account, at least when it comes to some of the oldest films. In this case, audiences back then must have had their minds blown when The Jazz Singer came out, but modern audiences notice a few more filmmaking flaws.

The occasional looping of footage is probably good enough for the time, but sticks out like a sore thumb nowadays. There are other jarring editing moments when jump cuts occur between two frames in the same shot for no reason whatsoever, and the lip sync doesn't match up with the characters when the camera is far away from them. The latter one wouldn't be as much of a problem, in my opinion, if the lip sync in character closeups is so good, but because it is, the lack of synchronization in far away shots just feels off putting. I also feel that nowadays, this film's story is cliche and isn't set up enough. Back in the day, I'm sure that audiences were completely invested in a story the likes of which had never really been put on film and were able to buy into the establishment of Jack Robin's career. Nowadays, though, audience members are able to grasp the beats of the cliche "child isn't appreciated by their family for something they love and leaves to pursue a career on their own, only to come back to face a major decision" story and there is barely any establishment of most of Jack Robin's relationship. Nowadays, the romance is established just for the novelty of it, Jack seemingly develops a career through sheer luck, and you aren't always able to grasp that Jack Robin is, in fact, becoming bigger and bigger as he goes on.

All that being said, I think that overall, this is still a really well-made movie, even today. The story, while predictable today, is still enjoyable to watch, the acting is really good overall, and to be honest, there is one element of this movie that has actually IMPROVED over time: the talking aspects. Sure, back then, it was just an excuse to introduce how new sound technology would work when it came to films and allowing their characters to talk and sing and was probably just a way for them to show off that new technology. However, nowadays, it draws attention to what the audience should take away as the most compelling moments of the film. The moments in this film that you hear are an important conversation between the main character and his mother that relieves the tension before the sound drowns out again as his father bursts in and the mood of the entire room completely changes, or they're important song sequences that show WHY Jack Robin is so good at his style of singing. Al Jolson is CAPTIVATING in this movie. Seriously, his singing sections are easily the best part of the film. Sure, the blackface is dated and probably unnecessary, but that's not Jolson's fault, that was just a normal performance method back in the day. The final few performances are some of the most emotional parts of the entire film, and it's all thank's to Jolson's incredible charisma.

All in all, I think The Jazz Singer was really good. Sure, it's not a perfect film technically for modern audiences today, but it's still a really enjoyable, likable story that holds up pretty well with a fantastic lead performance by Al Jolson and great talking/singing sequences that truly call attention to the most important parts of this film. Again, a weird film for me to grade, but I would definitely watch this movie again with no complaints. I don't know if I'll ever choose to watch it again, but if someone wanted to watch it or we watched it in another film class or something, I would absolutely not complain.