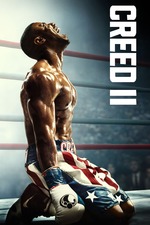 I've never understood the whole craze around the Rocky franchise. They're fun movies to watch, but I never felt the deeper impact of the series. Creed II changed the game for me. Not only is it my favorite Rocky movie, but one of my favorites this year.

The most important aspect of Creed II is that if you completely remove the boxing element and just focus on a man struggling with his relationships, it'd still be masterful. Steven Caple Jr. is no Ryan Coogler, but showed immense potential with his grasp for unique shots. Michael B Jordan improved upon his work in the first with a raw, emotional performance.

A common issue with this movie that many have is that it's predictable. I don't remember a Rocky movie that wasn't predictable. We have the underdog story, influence from older Rocky movies (especially IV), and the basic training montages and final fights. The Rocky movies have always followed a tried and true formula. Caple does nothing to change it, but it's so well made and has incredible character development.

Tessa Thompson took on a stronger role as her and Jordan were really a duo rather than one supporting the other. Sly Stallone took on a smaller role but was really integral here. What I loved the most was the story of Drago. This might be the most fleshed out a villain has been in a Rocky movie. Ivan and Viktor Drago both can't really act, but Caple took advantage of their best attributes.

With enthralling action sequences, Creed II will satisfy the fans ready for a bout. But where it really shines is the character growth and the redemption storyline. I do hope the story ends here, because then we'd be getting into the campy territory of older Rocky movies. For what it is, Creed II hits all the right punches and is an absolute crowd pleaser.