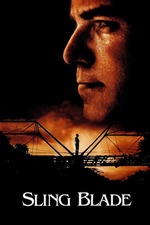 this watch has been longggg overdue as it’s been on my watchlist before i made an actual physical list. but after seeing Billy Bob Thornton in concert last night and actually meeting and speaking to him afterwards, i had no other choice but to finally sit down and watch this incredible work of art that he WROTE, DIRECTED, and STARRED IN.

it’s so crazy meeting a celebrity and then watching them on the screen as someone totally unrecognizable. the whole time i thought “this can’t be him!”. obviously the guy has aged a bit since playing the role as the handicapped killer, Karl Childers, but it was really the astonishing transformation of Thornton that made him so disguised. i mean every mannerism. every tick. was down. Thornton gives an incredible performance with his full body transformation as Karl. the walk. the underbite. the blinks. the “mhmm”s. all interconnect creating one of the most fascinating transformations on the screen i’ve seen.

the scene that captures me the most and sticks in my mind has to be the interview in the very beginning of Karl telling the story of his past which also happens to be the reason he’s been kept away. there are no flashbacks or any visual representations of what occurred that day; just simply Karl sitting in the dim yellow light of the lamp taking us back solely with his words and the sound of his voice. the story is told so vividly and plainly by Karl that we don’t need a physical representation. like reading a book without any pictures. you don’t need pictures to see the story happening right before your eyes.

it’s a slow watch for those who aren’t encapsulated in the first few moments, but i promise you, it’s worth it. this is a movie everyone should watch, especially if you’re an actor or simply a cinephile. it takes a few unexpected turns here and there, but in a disturbingly casual way. i will add, however, that i did not see that buried child twist coming! yikes!

***
side note: i cannot express the love i have for movies that surround a character who’s in or who has recently been released from a psychiatric hospital. (great example: Lisa (coincidentally played by BBT’s 2nd wife, Angelina Jolie!) in Girl, Interrupted) nothing intrigues me more than the insane!