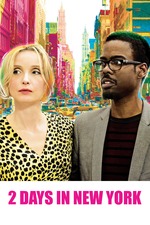 "This sequel remains true to the breezy wit and irreverently liberal spirit of Delpy's 2 Days In Paris (2007) - only this time around, the groundwork is much better laid for the film's more serious preoccupations (which came out of nowhere at the end of the first film, undermining their impact). Here, amidst all the intercontinental, interracial farce, our knowledge from the outset that Marion's mother (and Jeannot's wife of 40 years) has died, that Marion's boyfriend Jack from the first film is no longer in the picture, and that both Marion and Mingus have children from previous relationships (indeed Mingus is twice divorced), serves as a reminder that when fairytale romances end happily ever after, they have not really ended yet at all."
More at Projected Figures