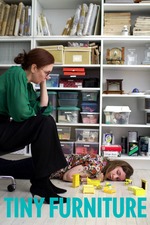 Wish I'd seen this before I saw Girls.

Charlotte is Jessa, and not just because Jemima Kirke plays both. Aura/ Hannah, Nadine/Marnie. In both Dunham's character is going through "a really hard time". I couldn't help but wonder if Tiny Furniture was just training wheels for Girls.

Aura believes herself to be striving, blind to the signs - late to work, death (I won't elaborate and make that a spoiler), lots of whining.

I don't know if I could say I really enjoyed the film, but I had to take screenshots of Aura and Charlotte at the gallery opening. Had to.