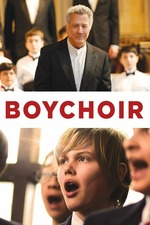 Part of A Film A Day

Boychoir, director Francois Girard's latest film, if described in four words is a heartwarming, crowd-pleasing phenomenon. The film features an aging Dustin Hoffman, alongside Josh Lucas and Kathy Bates. Boychoir follows the classic storyline of a father-like figure helping an pre-adolescent discover himself, and helping him to realize his talents. But, what makes Boychoir stand out, and especially magnificent are the performances in the film. It's rare, especially nowadays, to see a riveting child performance, but that's what you get watching this film. The child actors in this film are a pleasure to watch as they frolic the beautiful hallways of the historic American Boychoir School.

And although the acting is definitely noteworthy, what adds onto the quality of the film even more are the sets. Yes, in fact most of this film is shot inside the actual school. And this being true, it's truly an out-of-body experience watching this film because it feels like you're truly in the atmosphere with these kids. But adding all this up, what would a boy choir film be without the actual singing? These kids are truly gifted at singing. For boys ranging from 7-14, it's mind blowing to hear the pitch perfect performances of these boys, which adds even more to this film. It's evident that Boychoir wasn't a film slapped together sloppily by Francois Girard. It's evident that every detail has been carefully considered, and this was a film he truly wanted to make. It's evident that a lot of hard work, and energy went into creating this film.

But sets and music aside, the real star of the show is Dustin Hoffman. Is it a career defining performance? At the age of 77, Hoffman has definitely hit his prime already. But what Boychoir shows is a much more melancholic performance for Hoffman, who's already claimed his spot as one of the legends in film. When watching him in this film, you can see that there's a part of Hoffman's soul invested in this film. I was reading a review for this prior to seeing it, and a critic commented "there's a certain sadness to Hoffman's performance," and that definitely holds true. Though we never get to see the development of his character (which is one thing I was disappointed by in this film), throughout the entire film, Hoffman plays his character in a way which evokes and radiates regret and sadness. And for this reason alone, I think Boychoir should be watched a commended.

Though Boychoir isn't a perfect film, it's one of the best headliners shown at CIFF this year. It's heartwarming, inspirational and honestly just a very happy film. The performances ranging from Josh Lucas to Dustin Hoffman were magnificent, and the story, though generic, never becomes boring to watch. The sets in the film are amazing, as the film is predominantly shot in the real American Boychoir School. And so, though I could understand why people wouldn't enjoy this film (on a technical level), I loved it. I thought it was one of the better films of the festival, and it exceeded my expectations by a landslide.Though the reviews for this film are scarce so far, I can say with absolute certainty that people at the festival enjoyed this film, especially my lovely girlfriend who loved this film too, as it was one of her favourites (if not her favourite) of CIFF.