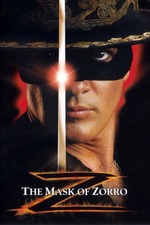 The Mask of Zorro

There were two of what I thought of as "adult films" that I watched frequently as a kid, Tommy Boy and The Mask of Zorro. My mother's two favorites, so anytime she got sick I knew it was time to fire up the VCR and put one in. And I will never forget how gruesome I thought it was that Captain Love has blood spurting out of his mouth when he's stabbed. That image has never left me and in relation to the entire film, and all the things I've seen since, it isn't that gruesome, but there's something about it that struck me, and the image held up like the entire film did.

Must be something about Amblin, because I actually watch and enjoy action scenes. The Spielberg connection, (among other things he was the executive producer), really shows. Could they have taken any more inspiration from Indiana Jones? The light-hearted comedic touches mixed into the mayhem work great.

The characterization of Captain Love is effective, his name, the hair, the leopard print saddle, a very hateable villain. And this film does a great job juggling the mentor and current hero, each has their own villain with their own backstory, and their own role to play. Acting is strong, Hopkins never messes around, death-defying stunts (many of which were done by Banderas himself), it's all so satisfying, and surprisingly gripping. I just realized I haven't disliked a Martin Campbell film yet.

The classes here. My god, I love to see the political intrigue and customs of fleshed out circles, the Don's and their cigars and suits, just imagining and entire film of Hopkins fitting into that crowd sounds like a treat.

James Horner's score! This film would be nothing without it, there are so many sides to the music, it adapts to suit the needs of each scene perfectly. It's like he's pulling a Carter Burwell, chameleon as hell.

This to me is a well-made Indiana Jones meets Pirates of the Caribbean. You have to want to like this film in a way, things happen a bit perfectly, so if you sit there and nitpick, you won't be happy, but if you have the intention of enjoying this, you'll love it.