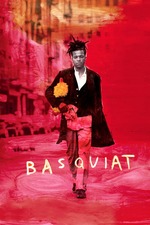 Film 46 of The December Project

Biopics are a terribly underrated genre. But Basquiat won't be an example if I want to argue that.

Okay, I pretty much only watched this because of David Bowie (playing Andy Warhol). And I'm a philistine about messy, unpretty abstract art; I don't even like Picasso, and I like the Stuckists, not for their angry manifesto, but just because I like the way their paintings look.

When this film was released I thought I should see it to learn about Basquiat himself. And he still sounded potentially interesting today. But it wasn't a very good way to learn: in a 1h 45m film - which sometimes feels nearer three hours - I got much less understanding of the man and his work than from reading the short Wikipedia article. And I never knew artists with addictive personalities could be so boring - speaking as someone who generally finds the type pretty interesting.

Apparently “Warhol was stunned by Basquiat's genius and allure”. This Basquiat (Jeffery Wright) was a fundamentally nice bloke-next-door attempting to play an arrogant arsehole. Who didn't even say much about his politics, which sound pretty important and complex. Physically, Wright really resembles the artist, but even in still photos the real Basquiat had the charisma and sharpness absent from the film.

Many other characters were unfortunately bland, and Benicio del Toro as Basquiat's old flatmate had an eardrum-grating stoppy-starty speech pattern. Whilst too long was spent on bland relationship scenes, the artist's girlfriend Gina (Claire Forlani) had some good character development, the energy slowly sucked out of her own art and her sense of self by the presence of a self-absorbed stronger talent.

Bowie was pretty great though; this is the first role in which I've seen him take on someone else's body language and posture and really seem like a different person. But the accent slipped a few times when he was walking and talking at the same time.

The soundtrack had some fantastic songs on it. Using Peggy Lee's 'Is That All There Is?' for an exhibition opening was inspired; Tom Waits tracks for scuzzy drug scenes less unusual but it was still great to hear them.

Perhaps this film will mean more to you if you love Basquiat's art. But given that the film-maker, couldn't get permission from the painter's estate to show any of the real thing in the film, despite being a friend of Basquiat's, the copies used instead may just frustrate.

Basquiat was notable for reminding me of one of my old pet hate cinema cliches, which I hadn't seen in ages: the punch-up to classical music. Was that a very 90's thing?