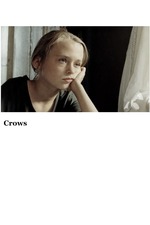 Apparently children can have existential odysseys too. Not a lot happens as the kids go around and crack deep lines about life and parenting at each other. Perhaps it's just simple childish lines that seem deep in context though. The older kid is simply amazing at delivering multilayered angst mixed with carefree ad hoc hopscotching. No wonder she only did one more movie as this is a mic-drop performance.

The story is very much from the child's perspective as she discovers more aspects of that relationship. Early on she bumps into a bunch of obstacles and dangers, but she is fearless when she goes out into the world as these things are petty compared to the feeling of being neglected in her own home. Despite the lack of dialogue these kid feelings are easy to relate to and sympathize with even though you know they are based in misunderstandings.

Along with the lovely acting performance there are some moments of inspired editing that gives the story a special flow as one scene suddenly turns into another. The visual choices made also give the story openings for less realistic interpretations that could heighten the emotional stakes. The actual themes of parent-child relations are less ambiguous and quite affecting.