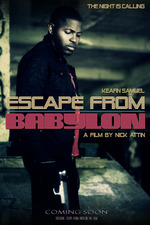 At first glance a thriller with too low production values for its own good, but there's a lot to like. It's structured as a comic book adaptation with influences from Miami Vice. The protagonist is mulling over the rotting city and his role in it as a potential vigilante superhero. Long gloomy car rides through the city night to an electronic soundtrack and voice-over contemplation are just what I want from this kind of thriller. Finding the killer is less of an issue than finding motivation to want to get involved.

The title itself is evocative and a good filter through which to watch the movie. It's an underrated tool to have a title that the viewer can think about how it applies to the story. The killer being white definitely plays into the themes of colonial scars. I don't know if it all ends up having as many ideas as it first seem, but it makes for a much more interesting movie than it looks like at first.

Nick Attin did pretty much everything on the movie, and it's impressive that it came together as well as it did. The one thing that completely fails is the sound mixing, as dialogue is often muddled and drowned out by background noise. It's the difference between the potentially good movie it could have been and the seemingly bad movie that it is.