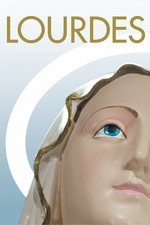 It's exciting to watch the synergic results of a director and a DP that really understand each other. Jessica Hausner claims to not be great at storyboarding but her DP Martin Gschlacht understands her visions and draws them up the way she intended. To me the result is perfection in every frame. The compositions, movements, colors, lighting, everything is just a pleasure to watch.

The restrained storytelling with a heavy emphasis on the visual is fittingly cold for the topic of pilgrimage and faith. It feels a bit like Roland Hassel, which tore down the police procedural genre by making it mundane. This story about old and chronically ill on a tourist pilgrimage in search of miracles mostly just feels like any tired group travel where most of the participants just want to get out of the house because they are cooped up and lonely. And the organizers have the same level of belief in the prospects of actual miracles as your average bingo night at the church.

That said, it certainly doesn't dismiss the usefulness of this organized religion. Hausner doesn't even dismiss their deity, even though it's easy to get the feeling she's not a big believer herself. She has even less faith in humanity, and that perspective makes me love her movies. The people are so petty and just as crippled by feelings of jealousy and sanctimoniousness as they are of their physical ills. As if the priest actually has something to say when it just sounds like he's lacking faith.

Of Horses and Men