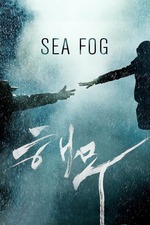 Not knowing the synopsis made for a surprise twist halfway through the film for me. Being written by Bong Joon-ho there are enough sinister twists and turns to go around even if you do know the most pivotal event. That writing reeks of his touch, but the story lacks some of the heart that usually lightens some of the darkness in the films he directs himself.

The first part of the film gives an interesting perspective on the state of the fishing industry. The economic hardship may threaten the lifestyle of these communities, but also the inability to evolve and actually adapt to the new realities. You also get a sense of the importance of this industry for the identity of large communities and even the whole country. There's also the corruption and view on immigrant workers as social comment and plot points.

As the story unfolds individuals are taking on very clear stereotypes based on single vices that threaten the fabric of the community. It's almost ridiculous as part of the story, but works nicely on a metaphorical level. The characters also don't need to be well rounded, because it is a tight thriller that works viscerally. The tiny fishing boat on the cold dark sea is a very unforgiving environment when things start to go wrong.