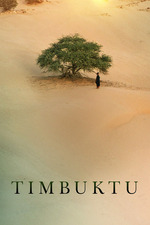 There's something asymmetrical about this movie that makes it very appealing. It starts out harshly with a group of Ansar Dine jihadists hunting a gazelle and then a shot of someone destroying some ethnographic art in a metaphorical cut. After establishing these guys as a serious destructive force the tone shifts ever so slightly to ridicule them as bumbling clowns. But clowns with guns and a desire to control other people with arbitrary rules. Time after time the lack of logic in their rules is called out and they reach feebly for counter arguments but the scenes keep ending in unresolved disagreement.

There are plenty of romanticized moments of the little family living happily with their cows, the fisherman poking at his nets with tourism ad photography, a group of friends chilling out singing songs, and a bunch of guys playing an imaginary game of soccer where everybody shares the same imagination. It's the good life that the jihadists don't like. It's as if they are insecure little men that suffer from such low self-esteem that they can't stand others feeling good about life.

There is nothing optimistic about the story as the small men with guns keep rejecting their own doubts. For all the humor and warmth in the script, photography and score you expect something more explicitly hopeful. Perhaps it's in the resolve of the people who surrender their lives rather than succumb and that there are doubts to reject.