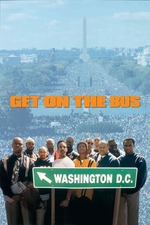 Get on the Bus

Unassuming as all hell (honest-to-god I thought this was a documentary up until about two week ago), but nevertheless elevates itself to be one of Spike's most moving, powerful, and relevant, despite its ultra-dated premise (most people today probably don't even know what the Million Man March is - the only reason I had even heard of it was because of Snoop Dogg's outro on 2Pac's All About U). Just goes to show his consistency and prowess as a director, and his comfortability with these ultra-stripped-down, ultra-human stories.

Side note: acting does a ton of the grunt work here. The entire movie takes place on a bus, and it's just as compelling as the next joint.