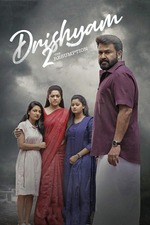 'The past is never dead. It's not even past.' (William Faulkner)

In Jeethu Joseph's brilliant sequel to his hit film from 2013, which was undoubtedly one of the most accomplished Malayalam films of the 21st century, avid film fan Georgekutty is once again confronted with his dark family secret that had actually seemed to be buried. The situation he is put in appears even more hopeless than in the previous film, but the viewer has already learned not to trust appearances. The film takes more time with the exposition until it eventually follows the same concept and again succeeds in surprising with the degree of Georgekutty's careful planning and foresight. However, the attempts to make him look like a helpless victim of his antagonist, who seems to have a witness and clear evidence, is only partially successful, and the attempts to mislead the viewer seem a bit more incredulous than in the first film. There can also hardly be a more overwhelming climax than the excavation in the first part. While the film is not quite as emotionally affecting, it is still a worthy sequel, which was not entirely necessary since there was already a resolution, but is nevertheless a great pleasure due to its entertainment value and intelligent script.