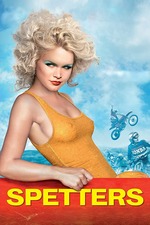 Verhoeven’s follow up to Soldier of Orange feels familiar yet drastically different. Like SoO, it follows a group of friends in a coming-of-age tale, young and carefree/careless. The difference here is that Spetters moves away from the relatively wealthy, cultured characters of the previous film, and instead focuses on working class kids; broke, shoplifting, and casually racist. Set in a dreary industrial Netherlands, with scenes on grey, bleak motorways and building sites, this is a move away from the university students of Amsterdam in Orange.

A deeply cynical film, the hope and need for adventure that is seen in Orange is lost. Here there’s a reckless live for-the-moment feel, regardless of the consequences. Verhoeven mocks religion, and portrays romance as a pointless exercise, even sex is over quickly and done with, or used as a weapon. Still shocking 40 years later, with its in-your-face sexuality and withering outlook, this stands up as one of Verhoeven’s best films from his pre-Hollywood work.

The Hills Have Eyes Part II