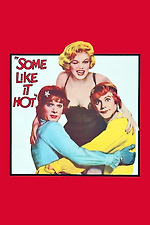 What an utter joy of a movie! Billy Wilder’s Some Like It Hot is fast-paced, wacky screwball comedy at its finest. Everything about it is absolutely spot-on—the beautiful, crisp black-and-white cinematography; Wilder and I.A.L. Diamond’s sparkling dialogue; each and every performance—which is crucial since Some Like It Hot’s over-the-top, gender-bending premise leaves it at all times poised on the edge of disaster. But like a perfectly executed tightrope walk, when it’s finished you feel an overwhelming urge to applaud the craftsmanship you’ve been so lucky to witness.

As with most of Wilder’s comedies, beneath the smiling cynicism lurks a winning heart—a façade befitting a movie about the disguises people don. Everywhere you look, dishonesty abounds. Joe (Tony Curtis) and Jerry (Jack Lemmon) play saxophone and upright bass, respectively, in a Prohibition-era Chicago speakeasy fronted by a funeral parlor. After they have the misfortune of witnessing the St. Valentine’s Day Massacre, they must go on the run from the mob, and so they join an all-female band heading to Florida, Joe as “Josephine” and Jerry as “Daphne.” The band, Sweet Sue and Her Society Syncopaters, is run by Sweet Sue (Joan Shawlee), whose demeanor is anything but, and managed by the marvelously named Beinstock (Dave Barry), who is, of course, shorter than any bandmate. The band’s lead singer, Sugar Kane (Marilyn Monroe) is actually Sugar Kowalczyk—like the real-life Monroe, she adopts a stage name and a sensual innocence, the better to navigate her personal disenchantment. And those Chicago gangsters? They’re on their way to Florida, too, for a meeting of the dubious "Friends of Italian Opera." Everyone tries to put on the veneer of class (the main gangster is known as “Spats” for his decorative footwear), but they can’t quite escape their underlying selves.

Wilder and Diamond tie all these relationships into a wonderfully tangled knot. Joe as Josephine counsels Sugar to worry less about getting the fuzzy end of the lollipop and to pursue her budding relationship with Shell Oil-heir Junior—Joe again, throwing on some hoity sailing garb and a Cary Grant impression (“Nobody talks like that!”). Jerry as Daphne is romanced by Osgood Fielding III (Joe E. Brown), a genuine millionaire and even more genuine eccentric whose proposal Daphne excitedly accepts, seeing a future of alimony checks once the little matter of Jerry is revealed. Meanwhile, Spats and his men face the fuzzy end of their colleagues’ lollipops, sending Joe and Jerry on the run again.

None of this chicanery would work without the sheer buoyancy of the performances. Monroe never looked more beautiful, and as difficult as she reportedly was during the shoot, her embodiment of wide-eyed, wounded sex appeal is the movie's heart, quivering like Jell-O on springs. Lemmon gives maybe his best performance, throwing himself headlong into the part of Daphne, giggling, flirting, but always retaining Jerry’s level-headedness. (Why does he want to marry Osgood? "Security.") Curtis grounds everything perfectly in the relatively thankless straight-man role. And Brown is an unmitigated delight, seeming, er, comfortable in his own skin (while giving the discomfiting impression that he might also be comfortable wearing someone else’s).

In the end, though, what makes Some Like It Hot work is what makes any comedy work—it’s hilarious. As the motley foursome flee toward Osgood’s yacht, everyone drops their pretensions and accepts their shortcomings. Joe’s a cad, but with real feelings for Sugar. Sugar should know better, but she has real feelings, too. And Jerry is, well, a man. Osgood’s famous final line acknowledges their deficiencies; as far as I can tell, Some Like It Hot has none.