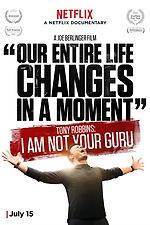 Not having read reviews but knowing Berlinger’s other work, I expected an exposé of a self-help huckster. Berlinger, documentary crusader of the truth, will go behind the curtain and reveal the charlatan that Tony Robbins is. Isn’t exposing the rich and powerful, the vain and the venal, one of the strengths of documentary film? It's not like we are not talking about someone who has gotten rich off the suffering of others, a man with a net worth of a half billion dollars who got his start selling quick fixes on omnipresent informercials from my youth with banal self-help platitudes of empty promise (life changes in a moment et all). And Robbins is the perfect target – a larger-than-life figure (almost literally, he's huge!) who combines empty new age self-help mantras with the demeanour of an aggressive football coach complete with motivational expletives.

Yet the film is totally soft on Robbins, basking in his evident healing power, insight, empathy, and charisma. But here is where the film is actually interesting, I think, or at least challenging to viewers like myself who went in with blanket disdain for self-help culture. Does it matter if Robbins is peddling nonsense, if his nonsense actually appears to help people? And despite his vast fortune which could sully his motives, he also genuinely appears motivated by a concern for helping people, even if this may mean that he is such a good con man that he even conned the filmmakers. While I would have liked a more critical or nuanced take on his self-help empire, I can appreciate the film for challenging my own preconceptions and biases. At the very least, I can see his appeal for so many people.