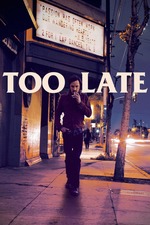 While Too Late is clearly steeped in 1990s cinema - self-referentiality, pop culture references galore, a film noir told chronologically out of order, philosophizing drug dealers, strippers, and hitmen, etc, etc. - what makes Too Late one of the most remarkable films of the past decade and one of the great feature debuts of the 21st century is how it recombines those elements in a novel way. It riffs on 90s cinema (and not just Tarantino's best work but also PTA - especially the camera work, Soderbergh, etc.) in the same way those films were riffing on the 60s and 70s, taking their best elements and then recombining into something new, in this case into a post post-modern naturalistic film - I'd say fused with some of the existential Malickisms of recent American indies - while peeling away the ironic distance that serves to date many of those 90s works at the same time as it keeps a formalistic aesthetic rigour which is just awe inspiring (and sad to see put down by some critics as mere gimmick). Perhaps too easy to dismiss in our disjointed cultural moment where film no longer has the import and relevance it once did, Too Late is still an instant classic for me, a rare contemporary film that makes me remember why I love cinema.

The Lady in the Car with Glasses and…