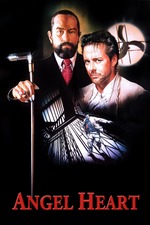 Okay I'm going to be up front; I've had a really long, emotional, stressful day today so I'm going to keep this short with these small points about this movie.

- It's really well directed.
- Mickey Rourke and Robert De Niro are awesome.
- Some parts tend to get a little repetitive in regards to structure.
- There's some jarring moments of horror sprinkled throughout what is basically a regular murder mystery.
- The soundtrack is 👌🔥👌🔥👌🔥
- I swear, they were either actually trying to make the plot twist as painfully obvious as possible or they were convinced people wouldn't catch on that early into the film.
- This movie has a weird fetish for fans.

So yeah, "Angel Heart" is pretty predictable in areas, but still rather compelling thanks in part to Alan Parker's rock solid direction and script on top of Mickey Rourke's engaging lead.

Check it out for yourself sometime.

(Here are some reviews better than this one: