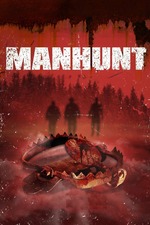 This has got to be one of the most rudimentary plotted and primitively accomplished horror movies of the (still relatively young) new Millennium, but personally I appreciated it a lot more than the vast majority of hi-tech computerized and wannabe trendy & intellectual flicks nowadays. And yes, I do realize I sound like an embittered old man! "Manhunt" is a prototypic so-called backwoods survival thriller and, moreover, a straightforwardly obvious ode to the pioneer and granddaddy of ALL backwoods survival thrillers "The Texas Chainsaw Massacre". The resembling plot is the most apparent tribute, of course, but director/co-writer Patrik Syversen expresses his respect and admirations for Tobe Hooper's horror landmark through a handful of minor details in particular, like for example the characters' similar minivan and the year in which the events supposedly take place, 1974, the release year of TCM. Setting the film in the early 70's has another great advantage, by the way, namely the elimination of some horrible clichés like the adolescent characters talking about their Facebook account the entire time and – most importantly – the elimination of the phrase: "I can't get a signal on my mobile phone!". Back then, girls also weren't as stupid as to go on a camping trip wearing make-up and stiletto heels, which makes it a lot easier for them to run from their assailants later on in the film. Anyways, so the year is 1974 and this quartet of youngsters – I deliberately refrain from calling them friends – are heading out to the middle of Norwegian nowhere to go camping. They pick up an extremely nervous female hitch-hiker at a roadside diner and this quickly turns out to be a very bad idea. Shortly after, they find themselves relentlessly pursued by a trio of seemingly motiveless but ultimately savage huntsmen. The biggest trump of "Manhunt" is undeniably the tense and ominous atmosphere. The film isn't just set in the year 1974; it often actually feels like you're watching a 70's flick, what with its raw cinematography and nihilistic tone. Another big trump here is the characterization of the villains. I usually prefer to know a bit about the bad guys' background and/or motivations, but the fact that they remain mysterious, vague and silent throughout the entire film here actually contributes to the gritty overall tone and disturbance level. We only know that they hunt down and set booby traps for human beings instead of animals and that they're unbelievably cruel. For example, they use barb wire to tie up their victims instead of regular rope and stab women in the back of their necks without hesitating. Needless to say "Manhunt" can be considered quite shocking and sick. I assume that the majority of the available budget went to the make-up department to buy blood and fake intestines. Money well spent, as the killing sequences are truly a horror fanatic's delight! The filming locations, acting performances and rough editing are also very suitable to the type of film the makers wanted to deliver.