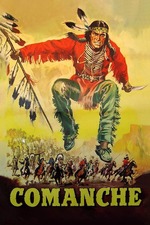 Race and racial conflict was always (or at least often) at the centre of the Western, but it was only in the 1950s that it became a thematic, something to work through. Maybe we can call these films Liberal Indian Westerns. Comanche is an example. It begins with the Comanche raiding a Mexican town, killing, taking the young women captive...but one of their victims is a trader who deals in Comanche scalps, giving the Indians a certain legitimacy. Crossing the border into the U.S. they come across some American scalp raiders. If we didn’t get the point there is some dialogue explaining the long history of atrocity following atrocity...both sides culpable. The purpose of the film is to break this cycle. And each side reflects the other: on the American there is Army scout, Dana Andrews, and the Cavalry – they believe peace can be made with the Comanche; but there is also Lowell Gilmore’s politician (boo), who believes in force, and Stacy Harris’s scalp hunter (hiss), who believes in extermination; on the Comanche side there is Kent Smith’s Chief who wants peace, and Harry Brandon’s No. 2 Chief who wants war. This structure could be interesting, but it isn’t. Everything is worked through in predictable ways, those that oppose peace needing to be killed (this is peace through righteous violence). The moral uncertainties of the beginning, where massacre has its reasons, are quickly removed by dividing the characters into simplistic good and bad. And George Sherman’s a bit useless, plodding everything along. And the images often have a garish ugliness...I don’t know if this was due to the print or the original photography.