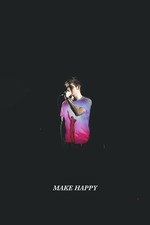 I didn’t think it still hit until the last ten minutes. I thought I’d outgrown it, the jokes didn’t enrapture me in the same way, his existentialism throughout the set and the naked artificiality of it all didn’t click in the way it once did, I enjoyed it but it was far from the document that I clung to years ago, when I was alone and filled with despair and more depression than I could bare. It was different, I had outgrown it, I could leave it behind me, it was sad but the thought of being able to leave a piece of art so tied to depression behind, to be able to grow and evolve without it, there’s something moving about that. But then the final two songs started.

I had a meltdown earlier, the first visceral one I’ve had in front of another human being in a couple months. There have been a few on my own but they are lesser, I can handle them after recuperating, but losing it in front of someone else is more impactful, you have to feel them seeth and struggle with your lack of control, you remember that their impression of you is forever altered by your screams and your sobs and the way you want to hurt yourself, to brutalise your own body to cope. The hardest thing imaginable is losing it in front of someone, especially when you have trauma tied to it like I do. I got home after hours of being out, trying to bottle it in, trying to use all my methods and coping strategies to not let myself go over the edge but I failed, I failed with a few minutes left to go and I battered my left shoulder into a car door, and punched my skull with my scarred right hand. I got home and tried not to scream and I lied down in my bed, still crying, still sobbing, still wiping the tears out of my eyes and dealing with the stages of personal development that I had lost from this, refocusing my mind on the trauma of the night nearly eight months ago where I lost everything.

It’s when he says that he doesn’t know how to handle things, that he doesn’t know how to construct that image anymore without breaking down, being able to cope with the overwhelming nature of spotlight and the world is something that I can’t do, and seeing him struggle hits me. Whether it’s from a place of reality or just another layer to the facade he presents is irrelevant, even fake things can cause real emotions. I thought I’d outgrown it and then I started crying again, and I realised that in my heart, I’m still that suicidal kid in his room alone, trying to figure out a way to live when everything felt empty. There will always be a part of me in that room, where this was the thing between me and a knife. There will always be that part of me even if it feels like that was a different person entirely now.

I don’t know why I’m writing this, I don’t know what it says, I don’t understand the value of reading these words but they are me, and as flawed as it is to me now, the moments that I need still help heal, they still provide catharsis and solace and that feeling like I can be okay. Because I am happy now, I have found love, I am going to be okay, I just have to remember that lapses don’t define me, that I’m not broken.

That the kid alone in his room survived.

Father of the Year