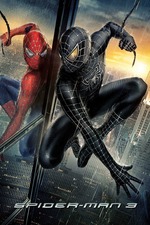 this movie works precisely because it’s the instalment of the series most devoted to Mary Jane as a person, because it most understands Peter Parker’s innate shortcomings as a boyfriend and as a man and makes that part of the literal storytelling, is actually a fantastic deconstruction or toxic masculinity by using the symbiote to reflect his own traits expressed in the first hour, just amplified and heightened into a rage filled beast of uncool misogyny and aggression. his major issue with Mary Jane is an inability to empathise and a tendency to be overly self interested, it’s all about what he wants and how he feels, he abandons her after a bad review after making it all about himself, he doesn’t ask her how things are going in life after she’s fired because he’s too interested in the Spider Man parade, he kisses Gwen Stacy in front of her because it’s what the audience want from Spider Man. even in his attempt to propose, he makes it about how he’s viewed by the general public and completely fails to hear her perspective, he assumes it for her. and all these narcissistic qualities become amplified into toxic spite and a desire to embarrass and and degrade someone who doesn’t give him what he wants. his actions in the jazz club are Peter, the Peter from moments in the first film where he kills the man who he thinks murdered his uncle, the Peter who can’t take a rejection. he becomes the type of men he always hated, he can’t control his own disgusting inner being and his desire to prove that he’s doing better without her. he’s not a being possessed, he’s a being unleashed, and that’s his arc, that’s what he has to overcome.
the amount of villains fit perfectly as all three represent personal failings of Peter and further down on this point of his own toxicities being the thing that destroys him, Sandman represents his revenge and how he can never truly get past his own desire for vengeance, Venom represents what he’ll turn into permanently if he doesn’t change, and Harry represents what his mistakes have already created. and the ending where he reconciles and is able to forgive Sandman by seeing him as a human being, by finally overcoming revenge and learning how to empathise with someone else, to understand that people are human and make decisions and that his perspective isn’t the only one, where he admits that he’s done terrible things as well. where he tries to save Eddie, even though it’s inevitable that he’ll die, even though his arc is one of irredeemable self destruction, he reaches out and tries anyway to save a man who he believes might have been something more. and where he bonds with Harry, redeems himself for the mistakes he made to destroy his friend, and shares a final moment with him, a man who is finally a hero after a lifetime of being viewed as a disappointment.
then he does what he always failed to do with Mary Jane, think about someone else, love someone else out of something more than just personal satisfaction, love someone for the hard days and the anguishes and the sides that are difficult, love someone for the person and not the idea. he offers out his hand, looks at her like a human being and asks her to dance. the lack of existence of a fourth Raimi film means that we’ll never know for sure if Peter became the man he wanted to be, if him and Mary Jane became a relationship based on mutual consideration, empathy and viewing each other as people, but the ending we have suggests hope, hope that he’s learned, that he’s willing to keep learning, that after all he knows and after all he’s been through, he still wants to be with the woman he loves, for who she is, not for who he wants her to be. that hope made me break down in tears. this is my favourite of the trilogy because it’s the one that feels the most raw, the most personal, the most hard hitting. it’s flawed and messy and less perfectly constructed than its immediate predecessor but i cannot think about the final moments of this movie without crying. this movie is what all comic book films should aspire to be, and it really makes me fucking sad people at large rejected this and decided that they’d rather have the fucking avengers instead.
but still, this trilogy lasts forever, and hopefully will bring hope to millions of kids throughout generations, throughout lifetimes, and prove to them that we can be better, that we can always be better.