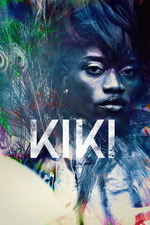 If I wasn’t watching this for the Queer Film Challenge as a replacement/compliment for Paris is Burning I would leave this commentary aside because this doc absolutely stands on its own and I don’t want anyone thinking based on all these reviews that you need some knowledge of PiB to see this film.

This is a terrific moving portrait of queer culture in NYC through the lens of several people involved in the kiki/ball culture scene.
I haven’t seen Paris in a while, so some of my memory of it could be off (I might modify this when I get around to a rewatch of it) but if memory serves Paris is much more directly focused on ball culture and delves a bit less than Kiki does on what goes on beyond the balls. Kiki is a bit broader in scope, picking several people involved in the ball scene to focus on and tell their story. Personally, I prefer this approach as I feel like I have a much broader view of who makes up ball culture and how they are using that strength of community for a larger purpose. But there’s value in both and I hope anyone who comes away from Kiki wanting a more comprehensive view of this history of ball culture does seek out Paris is Burning as well.

I was lucky enough to see a screening with several of the performers present for a Q&A as well and if you have the opportunity to do so I recommend it. They’re a really smart diverse group and you’ll get to hear some great commentary on the intersectional nature of their activism and the queer community and ball culture as well as fun, moving stories about what it’s meant to meet other youth in smaller scenes that are springing up internationally.

Also for anyone aware of any of the Paris is Burning controversy, the idea for this film came about from those within ball culture. They went and found a director to tell their story and had a high level of collaboration in shaping the film. It's terrific to see more documentaries moving towards collaboration rather than exploitation.