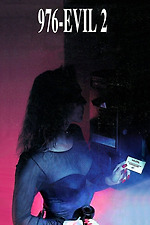 Halloween grows ever closer and seeing as I'd had my most successful watch of this Halloween season by checking out a sequel I expected nothing from, I thought I'd go and double down on Jim Wynorski's sequel to Robert Englund's debut feature. 976-EVIL was stunted by Englund's inexperience and lack of ambition, along with a reliance on bad actors to drive the plot.

976-EVIL II benefits from Wynorski taking the feature in a different direction. It's far more playful, treating the cursed phone line with gentle mockery rather than deadpan seriousness. Wynorski figured the first film would have been better if it had a) more boobies, b) more car chases and c) celebrity cameos (Elvira on steroids herself; Brigitte Nielson). And he's fucking right on all counts. He also inserts a loving tribute to holiday classic It's A Wonderful Life...with zombies. That scene alone is worth watching 976-EVIL II for.