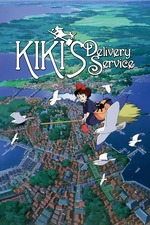 What a pleasant day, watching two Miyazaki classics. Most, if not all of his films can turn the worst of days around. Speaking of good days and bad days, here's Kiki's Delivery Service-- a relatable fairy tale of adolescence, a powerful example of feminism and female agency, a profound and fascinating look into artists and their creative process, or just another great Studio Ghibli movie to chill out to. Also, I cannot emphasize how great the music was in here, both Joe Hisaishi's score and the Japanese songs.

Don't want to add so many things this time since I've basically laid out most of my general thoughts in my previous review. Simply an idyllic, masterful, and comforting ride. Set in a fictional city by the ocean that resembles many towns in classical Europe, the world of Kiki's Delivery Service is one I wish I lived in. A pipe dream for sure, but what Miyazaki provides us is a story we've all written ourselves.

When the coldness of the taxing adult life sucks the fun out of things and play becomes work...ugh! No high stakes, no over-the-top action or drama scenes; just a turning point in all of our lives captured in the moment. And when you look back at those adolescent years, how many challenges you had to face, and how far you've come much later, you realize how high the stakes really were. It's like magic.

To this day, I have not seen any of the Ghibli films in their English dub. Watched this one with sub again but after I finished, I switched to the English version for one specific scene: the ending. Gotta say the dubbing was good, but man oh man did they almost ruin the ending. As we know, Jiji has lost his speaking, at least from Kiki's point of view, which we've been following all movie long. Just before Jiji hops on Kiki's shoulder, he says a line which breaks the importance of him not being able to speak at all going forward. This was not in the original Japanese script and only added in for the dub. On why Jiji couldn't (rightfully) speak at the end, I caught this bit from The Kingdom of Dreams and Madness:

"...That her magic came back? Her magic deepened, you see. Would you prefer if Jiji said something like, "See what happens without me?" That's annoying. You'd tell him to shut up. When you gain, you also lose."
-Hayao Miyazaki

The last part of the above quote gave me a new perspective on the significance of Jiji's speech and was inclined to see the film again. Too bad the English dub kind of undermined the impact of Miyazaki's intended conclusion but okay. So uhm, good movie yeah?