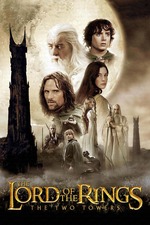 95/100
The Two Towers has that "in the middle" feeling. It's the weakest of the trilogy though it's still a damn good movie. A lot of scenes can feel like a meandering march doing nothing to move the story, a slow trek to the finale. The Fellowship has split up and though the film does a great job of balancing the different storylines, the storylines themselves vary in excitement. Merry and Pippin's hangout with Treebeard and the Ents was okay; Frodo, Sam, and Gollum's walk to Mordor was better; and Aragorn and the rest's efforts to combat Saruman's army were the best.
Character introductions were also really nicely-done. The Two Towers also has stunning cinematography and I think it's the best-shot and the best-looking among the three movies. Watched the extended version. Here's some random thoughts and notes:

-Sir Christopher Lee was one of the most badass people to walk the face of the Earth!
-That voice and motion capture work; I think Andy Serkis was the best performer in the trilogy.
-I can't take "They're taking the hobbits to Isengard" seriously anymore.
-"Looks like meat's back on the menu boys!" I can't take hungry, English-speaking Orcs and Uruks seriously, too.
-RIP Viggo's toe.
-Frodo's PTSD is already kicking in.
-Gimli's one-liners are gold.
-Gandalf's whiteness in this movie makes detergent companies jealous.
-I'm sorry but New Zealand is just a really beautiful place!

-Haven't mentioned this yet but I love Elijah Wood's teeth gap.
-I wonder what Tarantino thinks of Hobbit feet.
-Brad Dourif is an underrated actor; Gríma Wormtongue is also an underrated character.
-Aragorn is the finest 87-year-old you'll see anywhere. He's at his sexiest in Two Towers.
-"Poh-tay-toes!"
-Eowyn is a feminist icon.
-Eowyn, if you want to steal Aragorn, who's loyal to Arwen by the way, you're gonna have to make a better stew than that, honey.
-Anti-war, feminist, and environmentalist themes are always good bonuses.
-Legolas riding a horse is some shit you'd see in a video game if anyone noticed.
-Boromir and Faramir were best buddy brothers. Denethor is a dick dad, easily my most hated character in the entire trilogy.

-What's up Haldir! I suppose everyone remembers you from your three minutes of screen time in Fellowship!
-When it rains in a battle, you already know it's epic.
-My former English teacher, who both have seen these films and Game of Thrones, said that The Battle of the Bastards was better than Helm's Deep. The audacity!
-Legolas and Gimli's kill count is legendary. But come on, they couldn't possibly have killed only 42 and 43.
-Legolas' slide down the stairs while arrowing down Uruks will go down as one of the coolest moves in anything!
-The last hour was particularly unbelievable in terms of craft and scale. It boggles my mind how Peter Jackson, who also had a cameo again here, was able to make this. From the massive Battle of Helm's Deep and Osgiliath to the fall of Isengard, it's amazing how this vision came to life.

-Sam's monologue near the end summarizes the morals of The Lord of the Rings. Hope-- believing in the goodness of anyone and anything-- may hurt as much as it may comfort. Finding good may just be us opening up ourselves to the corruption and cunning nature of men. But the strength of belief, the courage of heart, and the power of will shall prevail and bring peace and kindness unto the land.